You are here: Home / Parenting / How To Make a Clothespin Airplane 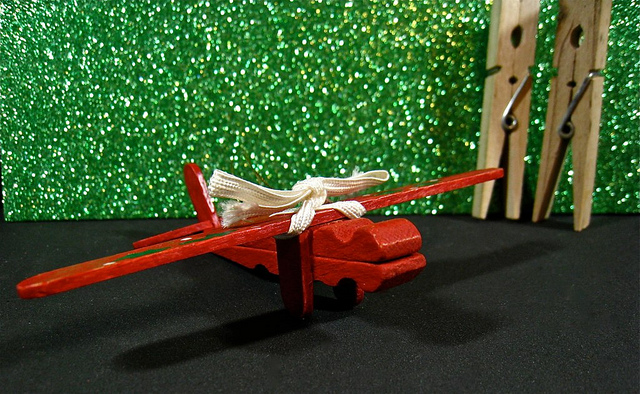 Looking for an art project to keep your child busy this summer? Using nothing more than a clothespin, two small crafting stick, two large crafting stick, a hot glue gun, and some paint, you can create fun model airplanes. It’s an otherwise simple project that requires just a few basic supplies, making it the perfect “go to” project when it’s raining outside and you’re trying to find something to occupy your child’s time.

There are several different ways to make a clothespin airplane, but the method I’m going to reveal here is arguably the easiest. Feel free to modify your’s if you’d like. After all, that’s one of the great things about making arts and crafts projects!

Getting Starting With Your Clothespin Airplane

Start by taking apart a clothespin and removing the spring inside. Clothespins may forcefully snap back, so it’s recommended that parents perform this step. You don’t want the clothespin snapping on your child’s fingers.

Once you’ve removed the spring from the clothespin, have your child paint the large crafting sticks (looks like a Popsicle stick), the small crafting sticks, and the newly disassembled clothespin. Use either water or acrylic paints, as oil-based paints will take far too long to dry.

The color is entirely up to you and your child. Some people prefer red (such as the example depicted above), whereas others prefer white, blue, black, etc. Of course, you can always make multiple clothespin airplanes while using a variety of different colors. Leave the parts spread out on a newspaper to dry for at least an hour.

After the parts have finished drying, use your hot glue gun to glue the top portion of the clothespin to the bottom portion. Next, glue a large crafting stick on the top and bottom of the clothespin, about a 1/4 inch away from the front. This method is different than the clothespin airplane depicted above, so don’t use it as reference when following this tutorial.

Note: when Christmas rolls around, place a ribbon on top of your child’s clothespin airplane to use a Christmas tree ornament.

Looking for other kids activities?  Check out our Play Time category.