You are here: Home / Parenting / What To Expect When Moving From a Crib To a Toddler Bed 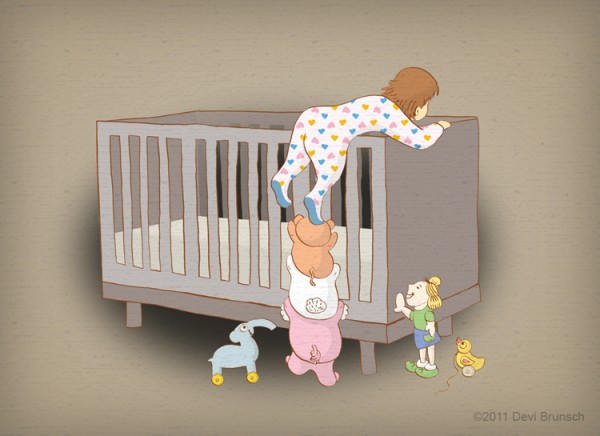 Transitioning your child from their crib to a new toddler bed can be a challenge, as even small changes in their sleep routine can loom large in their world. Yet, this is an inevitable task, as your child cannot safely continue sleeping in their crib once they are able to climb over the railings. Most experts instruct that children who are over 35 inches tall are bigger than cribs are designed to handle, and at that point it is time to switch over to a toddler bed. In terms of the right age for the switch, the typical range is anywhere from 18-30 months. You’ll know it is time when your child begins to try climbing over the railings on a regular basis, or they are actually successful in getting out on their own during the night.Yet, you may have some concerns about accomplishing this changeover, especially if your little one is a poor sleeper. To help ease your mind and give you some tips to make the process smoother, let’s cover some common problems that parents experience during this transition below.

With their new-found freedom, your child may begin getting up at night frequently. As they no longer have to contend with full side rails (just half rails that will keep them from rolling out of their toddler bed), your child will be able to get out of bed at will. This can pose a serious problem, especially if your child does not know how to self-soothe when they wake up during the night. What is the solution? Implementing a system of rewards and consequences is usually highly effective – if you can find the right motivation. For example, you can set a rule that your child is to stay in their bed for the duration of the night, and only get up when it gets light outside. On nights when they successfully accomplish this, they will receive a gold star or good mark on their sleeping chart. At the end of a preset number of gold star nights, they will be entitled to a reward. This can be whatever your child truly values – whether it be toys, treats or maybe special privileges like getting a trip to the park (1).

Kids often cry out in the night or come to your room for attention, and it is important that you communicate that this isn’t ok behavior. The key is to check on them to ensure that they’re fine, but not provide them with any attention. Why? If you come in and sing to them, cuddle or tell them a story to get them back to sleep, this will reinforce the behavior that you’re trying to discourage. The same is true if they come into your room – simply pick them up and carry them back to their bed, arrange their covers and say goodnight. They will learn very quickly that they aren’t receiving the attention they want, and start self-soothing during the night instead.

It is also critical to establish a set routine at bedtime and stick to your guns. If every night is a drawn out negotiation, where you plead with or bribe them to go to sleep, you’re in for an exhausting few years. In contrast, if you tell them the ground rules and don’t alter these no matter how much your child resists, you’ll be far better off in the long run. While they may be able to come up with a seemingly endless array of excuses to avoid going to sleep, make sure that they understand it is not your job to stay with them until they do so.

While it may seem counter-intuitive to set an earlier bedtime if your child is having issues falling or staying asleep, this method often works. According to respected pediatrician Dr. Weissbluth, if your child gets too tired they will become cranky and uncooperative, and adrenaline will actually be released in their system (keeping them awake). Instead, it is better to go to bed earlier, and they will often fall asleep much faster and be easier to deal with too (2).

All told, the move from a crib to a toddler bed doesn’t have to be unpleasant, if you follow the straightforward advice covered above. Be sure to reinforce that your child is now grown up enough to sleep in a real bed, and that doing so is a privilege. You can tell them that this privilege comes with responsibilities, like staying in bed during the night. With this approach, they will likely want to show you how grown up they are – allowing you and your family to sleep easy all night.